Smoke gets in your Eyes. Our designer chose to paint these beautifully marked tree sparrows on a background marbled with smoke. The smoked technique produces a wonderful textured look which is very easy to create. Rating: Medium: acrylics and oils on wood 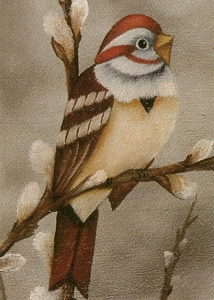 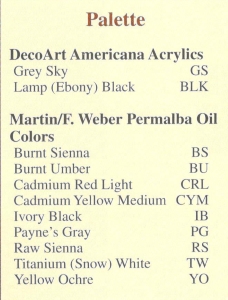 Step 1. Sand the entire tray thoroughly and wipe with the tack cloth to remove sanding dust. Step 2. Seal tray with wood sealer and the 2” roller sponge brush. Allow to dry and sand again. Wipe with the tack cloth. Step 3. Using the roller brush, paint the inside of the tray with two coats of GS. Allow to dry between each application. Continue rolling the brush until you achieve an eggshell finish. Step 4. Paint the border and back side of the tray with two coats of BLK using the roller brush. Allow to dry between coats.

Step 1. Light candle and allow to burn for a few minutes. Step 2. Hold the scooped side of your old spoon over the flame and allow it to gather carbon from the flame. Step 3. After the spoon is coated black with carbon, hold the spoon over the flame until you see a steady stream of smoke rising above the candle. Move the tray over this stream of smoke and allow the smoke to adhere to the surface of the tray. After you have gotten the desired look, spray immediately with the matte spray as the carbon will smudge if touched. Be careful not to handle surface until it has been sprayed. Step 4. Trace pattern onto tracing paper and position on the tray. Slip transfer paper under the pattern and transfer the design using the stylus.

Back Valentine Greeting Card and Frame
Next The ‘Blended Pansy