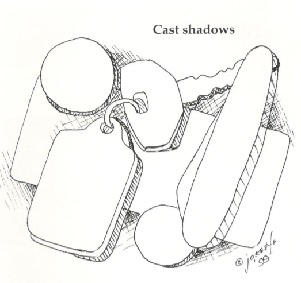 1.Lightly sand the top and bottom of the dish as needed and wipe with a soft, damp doth to remove dust. 2.Dampen the dish with water, then stain and seal the piece in one step with a mix of sealer + RU + BU + BLK Brush over the top and bottom of the dish with one stroke so that the stain/sealer is transparent and the wood grain remains visible. 3.Trace the pattern onto tracing paper using the black pen. Center the tracing on the dish and tape down one side to secure it in place. Slip gray graphite paper beneath the tracing and carefully transfer the outline of all items (omitting details) onto the surface using the stylus.

1. Basecoat the design elements as follows: paper ticket AW; remote keyless entry device (remote) and top of key BLK; knife handle and “panic” button SR; knife blade, quarter, and shaft of key GS; penny PC. Allow to dry thoroughly. Next, apply two coats of CO to the penny, allowing adequate drying time between applications. Let dry. 2. Position the tracing over the basecoated areas and tape down one side to secure. Slip white graphite paper beneath the tracing and transfer the details for the remote, knife handle, and top of key using the fine point of the stylus. Remove the white graphite paper, slip gray graphite paper under the tracing, and transfer the details for the quarter, shaft of key, ticket, penny, and knife blade. Remove the pattern. 3. Using the pencil, draw a line all the way around the top of the dish, approximately 5mm down from the top edge. Using a sideload of RU, float along this line with the point of the brush toward the center of the dish. 4. Use the 1/4″ angle to float soft shadows on the paper ticket with a sideload of LC. Starting in the small triangular areas where objects are lying on top of the ticket, walk the color out slightly to create the illusion that the ticket is under other parts of the design. This may require several applications to achieve a soft look. (The darker cast shadows will be applied later.) Also shade the small tear in the upper edge of the ticket between the knife and key 5. Using the 1/4″ angle and a sideload of NG, shade around the edge of the quarter, around the raised head, and to separate the features. Also float across the top of the forehead and under the chin to create contour. Allow to dry. Next, use a sideload of SB to darken the back of the head, shading under the hair in the back, in the eye socket and down under the neck. Allow to dry thoroughly. Sideload the 1/4″ angle with BUT and float highlights on the bridge of the nose, the bottom of the fringe of hair, on the cheek, and at the front along the bottom of the neck. Using the No. 0 liner and BUT, paint the eyebrow and randomly highlight the outside rim of the coin. 6. Sideload the 1/4″ angle with NG and shade the blade of the knife, starting at the handle and running down along the side to the end of the blade. Create the indentation in the blade using the tip of the brush and NG. Float NG along the shaft of the key where it attaches to the top as well as down the upper edge. Also float this color on the lower edge of the shaft, leaving the center of the shaft lighter. 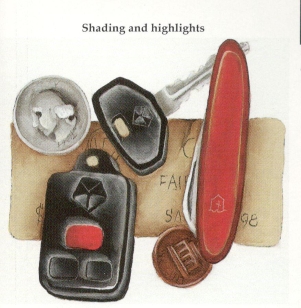 7. Sideload the 1/8″ angle with RU and float around the inside edge of the penny, around the building, in the small dark rectangular areas separating the pillars, and around the front of the steps. Allow to dry. Apply a second coat if needed. Using a liner and PC, place highlights on the pillars and steps, and randomly along the outside rim. 8. Float RU along the left side of the panic button with the 1/8″ angle, then use the 1/4″ angle and the same color to float around the outside of the knife handle. Next, sideload the 1/4″ angle with PC and float a highlight about 1/8″ in from the outside edge of the knife handle, giving it a flat look on top. Use a liner and PC to place a shine at the top left and bottom right of this highlight to lighten further. Using the No. 0 liner and TW, highlight the blade along the outside edge to the left of the indentation. 9. Use the Vi” angle and NG to highlight the top surface of the remote, floating the color around the right edge and slightly across the top and bottom edges. Note: There are two areas of highlights on the remote, on the top surface and on the right and the bottom edge of the sides. Also use NG to highlight the remote around the buttons and around the Chrysler emblem. Using the same color, float highlights on a few of the triangular shapes on the emblem to add dimension. Repeat application of highlights as needed for smooth coverage and contouring. Using a sideload of GS, strengthen the highlight on the bottom and right side of the remote, working over top of the previous floats of color. Using a liner and TW, place a shine line over this same corner of the remote. If the remote doesn’t have enough contrast to shape and contour, float GS over the previously highlighted areas on the corners of the buttons, creating smaller shines. Use the 1/4″ angle and NG to place a highlight on top of the key, floating around the inside shape and down the right side for dimension. Highlight a few of the triangles on the Chrysler emblem with this same color. Clean the brush, then sideload with GS and lighten the outside corners of the highlights over top of the previously applied color. 10. Using the No. 000 liner and SR, apply very fine double lines around the sides of the ticket, just in from the edges. Add the lettering using the No. 000 liner and BU. Note: This can be changed to any kind of ticket by simply changing the lettering. Outline around the ticket with the No. 0 liner and SB, making the line on the bottom of the ticket a bit heavier. 11. Use the No. 000 liner and SB to outline around most of the head on the quarter and to add the lettering and numbers. Highlight the letters and numbers using the No. 000 liner with TW, painting in between the lines that make up the letters. Outline the quarter using the No. 0 liner and SB. Apply a few little squiggles with the same color to suggest that there is more lettering in front of the mouth. 12. Add the lettering on the remote, using GS for the two black buttons (that lock and unlock the doors) and TW for the panic button. The Chrysler emblem has little GS shine lines around part of the outside edge and on the inside of the triangles. Using a liner, place a small NG crescent on the left side of the split ring hole to create dimension. 13. Using the No. 000 liner, texture the top of the key with tiny BLK circles, starting at the outside edge of the highlight and working toward the center. (This becomes less distinct near the hole.) Outline around the highlighted area with BLK to sharpen the side planes of the key top. Sideload the angle with NG and float small diagonal lines at the corner of each side. Using the No. 000 liner, define the Chrysler emblem with fine lines of GS at the center of each triangle. Outline around the emblem with BLK. Inside the hole, paint two sides TW for inside dimension, then outline on both sides with BLK. Outline both sides of the key shaft with SB, making it a bit heavier on the right side. Apply a TW shine on the key shaft using the No. 0 liner. 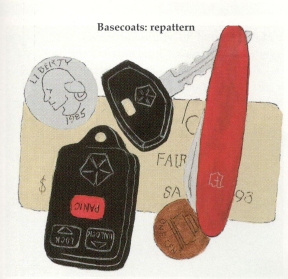 14. Using the No. 0 liner with GS, paint the split ring. Outline the ring with SB, dividing it into two coils. Place TW shines at the top of the ring to highlight. 15. Outline the knife handle and blade using the No. 0 liner and SB, making the outline on the right side a bit heavier. Add the small design on the handle with CG and the No. 000 liner. Let dry, then outline to the right of the design with fine lines of SB. Paint the cross in the middle BUT. 16. The cast shadows that make one object appear as if it is lying on top of another are shown in both the diagram for the cast shadows and in the painted example. Apply these shadows using the 1/4″ and 3/8″ angles and BU + SB. The shadows usually start at one corner of an object, run along the edge, then disappear under the object. If they are too dark, they block the details of the underlying object. If too light, they won’t create the proper illusion. I suggest that you start out with just BU to paint the area correctly, then add a touch of BLK to darken the proper amount. Note: It is much easier to start lighter and then darken the area rather than go in too dark and ruin the project. Also note that the cast shadows under the remote and key are much darker than the shadows under the knife. 17. Float background shadows around the outside of the entire design to create the illusion that the objects are laying in the dish, not floating above it. Dampen the entire dish, then apply these shadows using the 3/8″ angle and RU + BU. Start in the tight triangular areas between the objects and walk the color out into the light so that it fades gradually into the background. These “sit down shadows” should not have any particular shape or ending. 18. Using the No. 0 liner and CG, carefully apply a line around the top edge of the dish just under the RU shading.

Allow the paint to dry and cure. Carefully erase any remaining graphite lines, then wipe with a damp cloth to remove residue. Apply several coats of matte varnish to the dish, allowing adequate drying time between applications. Gently buff between every two or three coats using the pink buffing pad, wiping with a damp cloth to remove dust. Apply as many coats of varnish as needed to protect the painting from repeated buffeting from the sharp objects that will be tossed in it.
PaintWorks team
tweet